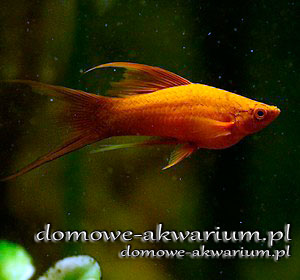 This freshwater species lives in lakes and rivers.

Females of this species can change own sex with age. The fertile female can become a fertile male (this male can fertilize other females). Some researches believe that this change of the sex is result of the late maturation of the male which has been qualified as female. Males of this species are aggressive and territorial towards each other so you should keep only 3-4 males in the aquarium.

These fish prefer to live in pairs. They prefer a spacious tanks. This aquarium should be covered and should include a lot of plants, space to swim. A partial waters changes should be done regularly. You may also add sea salt to the water - 1 teaspoon per every 10 litres.

This is live-bearer species - fertilization is internal. The pregnant female can be recognized by the dark pregnant-spot on her belly. The gestation period of the female lasts 4-5 weeks but it depends on the water temperature. The fry (about 250) appears in aquarium after this time. The fry starts to swim and feed straight away. You should immediately remove young to a separate tank. The parents don't take care for the offspring and they can eat it too.