- breeding in the aquarium 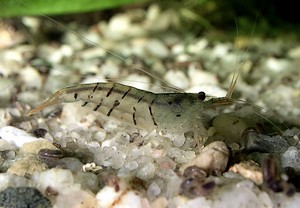 This species comes from China.

There are a lot of multicolour variants this species e.g. black tiger, blue tiger, red tiger etc. Basic variant is beige-gray with 5 dark brown, transverse, discontinuous stripes. There are 2 dark brown spots on the head and on the base of the telson. The head and telson are orange. There is also a lot of small and brown spots on the carapace. We can recognize sex of the shrimp when it matured sexually. Then female is somewhat larger than male. She has visible "saddle" behind her head and she has bent up her telson.

This species prefers to live in group of a few shrimps. This is friendly, peaceful species and it molts in order to grow. Then the species is apathetic, without appetite and it hides among plants. Everything returns to normal after several days. The species can lose or change its colours when it is stressed - during the transport, when it lives with predators or very active fish in one aquarium, after rapid changes of water parameters etc. It can also escape from aquarium when water has poor quality. This species is a scavenger and we shouldn't overfeed its. We should feed this species once per day with ration of the food which it will be eaten to 2 hours. Occasional breaks in feeding - through one or two weeks - are beneficial for this crustaceans.

We should let in this species only to chemically stable aquarium with crystalline clean water. It is sensitive to chemicals and copper and nitrogen compounds. We should avoid any drugs with copper and aquariums when treatment with copper drugs was ever performed. This species is also sensitive to rapid changes of water parameters. We should regularly clean the bottom of the aquarium and we should systematic do a partial water changes (about 30%). The water must be oxygen-rich. The tank should include soft and fine substrate, lot of hiding-places among stones, roots, caves, coconut shells, pots, etc., lot of plants with fine leaves. We can also keep this species in a general aquarium with small fish and neocardina shrimps, without its natural predators or fast-moving fish. We shouldn't also keep this species with shrimps from Bee because they will be crossed together.

Reproduce this species is easy task. Matured sexually shrimps form pairs in group. Male intensively circles around fertile female. Then he nears to her and he connects with female a brief moment (cross position). In this time male deposits his sperm and his role in reproduction ended but sometimes first approach is not effective and male tries again. Next female lays eggs one by one (30-40 eggs) and she puts fertilized eggs under her abdomen in her pleopods until their hatching. Female fans the eggs her uropods and she shifts their in her pleopods all the time. Stressed, afraid or inexperienced female can leave the eggs. The eggs have pair of black dots (eyes) just before hatching. The eggs hatch after about 3-4 weeks and the young are independent. They immediately start feeding and they look like adults but they are very small - about 2 mm. Their internal organs aren't fully developed - especially reproductive organs. These organs will gradually develop during next metamorphosis (the incomplete matamorphosis). The aquarium for young shrimps should include lot of plants, a filter with protected outlet. The female is immediately ready for next reproduce after hatching. She can have eggs in her pleopods and she has visible "saddle" behind her head at the same time.