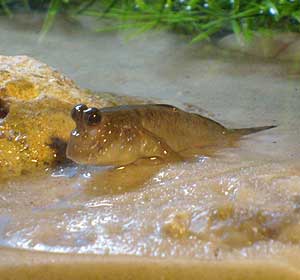 natural population Mudskipper western coast of Africa. Mostly localized in the estuaries to the ocean covered with abundant and lush mangrove forests around coastal islands. They occur mainly in the shallows, rarely in deep water. These muddy, muddy edges, where fresh water is mixed with salt water. This species is also recovered in waters completely sweet, but always close to the waterfront.

Mudskipper is a species of fish. Characterized by an elongated body tapering towards the rear. In broad head high and close to each other are mounted protruding eyes, which have a wide field of view. Body color ranges from gray and brown color, with dark, diagonal stripes on the sides and blue markings (more densely distributed on the head). Belly and lower fins bright, upper fins darker in color. This species has two dorsal fins - the first is shorter and higher, the second is longer and lower. Both have a blue margin, rimmed on both sides in white. Caudal fin is short and thick pelvic fins are joined at the base, anal fin is narrow and long. Pectoral fins are mounted on a long and muscular lobes, so that the fish is able to rotate smoothly. This species is very well suited for air breathing and substantially more residence time than water. After leaving the land the gill lid closes tightly and the atmosphere filled with highly vascularized chamber behind the gills. Oxygen is gradually released into the body through the blood vessels (the exchange of gas). In this way, released only 50% of the needed oxygen. The rest is assumed to be the surface of the skin and fins heavily vascularized and back of the throat. Mudskipper very smoothly moves across the land - it is, jumps, and even climbs. Allow him pectoral fins and tail. Gender differences in this species can be seen only after sexual maturity by him, and even then it is not a simple task. The female and male differ genital warts, slightly colored, but also behavior - males are territorial and aggressive. 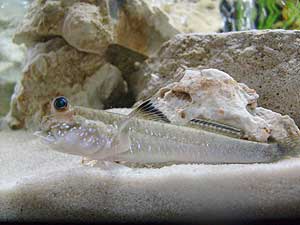 This is an intelligent, curious and quite funny fish, which with interest the environment. It can quickly get used to its owner and eventually climbs up his hands to receive food kept in the hand. Males towards each other are very territorial and agresywni.Potrzebują a lot of space and hiding places. In defense of his sickbay even fight to the death. Initially, when there is an intruder, poskoczek stroszy their dorsal fins, putting and leaving them for a change. When an intruder enters does not respond to the attack. It is quite sturdy, and easy to maintain species provided that they are satisfied the most basic needs. In fact, it is best kept singly in aquaria species. But in very large containers can be kept with fish that like a slightly brackish water and are sufficiently large (eg czworooki, strzelczyki, srebrzyce or argusy) or crabs. 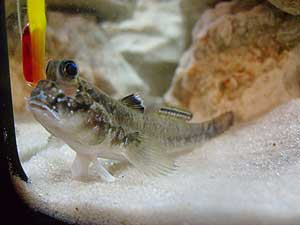 There is no need

oviparous fish, which have not yet managed to breed in captivity. In nature, spawning occurs at the beginning of the rainy season, and the annual fish mating join, which reached more than 10 cm in length. Male copies and branched tunnels deep in moist sand / mud, where spawning takes place. Offspring are protected by their parents.